The Llotja de la Seda or the La Lonja Silk Exchange in English is one of the many things to do in Valencia city and is definitely a big tourist attraction. Located in the old city center,  I can highly recommend it as one of the must-see sights on any Valencia itinerary.

It’s not hard to find as it is next to one of the other major attractions in Valencia, namely the El Mercat, the biggest indoor market in Spain, and one of Europe’s largest, with over a thousand stalls selling everything from fresh fish to olives and flowers.

The amazing Goth architectural masterpiece Silk Exchange became a UNESCO World Heritage Site in 1996 saying “the site is of outstanding universal value as it is a wholly exceptional example of a secular building in late Gothic style, which dramatically illustrates the power and wealth of one of the great Mediterranean mercantile cities.” We agree. 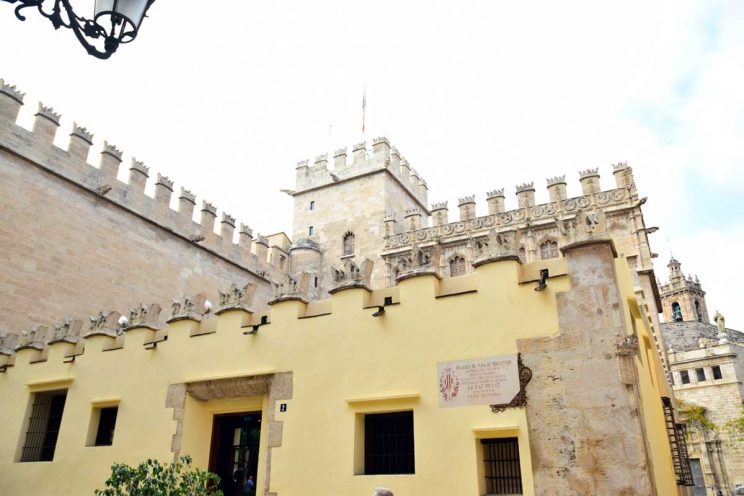 From the outside, the Silk Exchange looks like an old fortress and reminded me very much of the Cordoba palace. The old Medieval look with the stone walls might lead you to believe it was once a palace. Construction of the Silk Exchange started in 1483 under the direction of a master builder by the name of Pere Compte.

Pere did not live to see its completion in 1548. In those days during the 15th century, the Kingdom of Valencia was a formidable city and at its highest point, culturally and economically. It was the flagship of the Crown of Aragon. 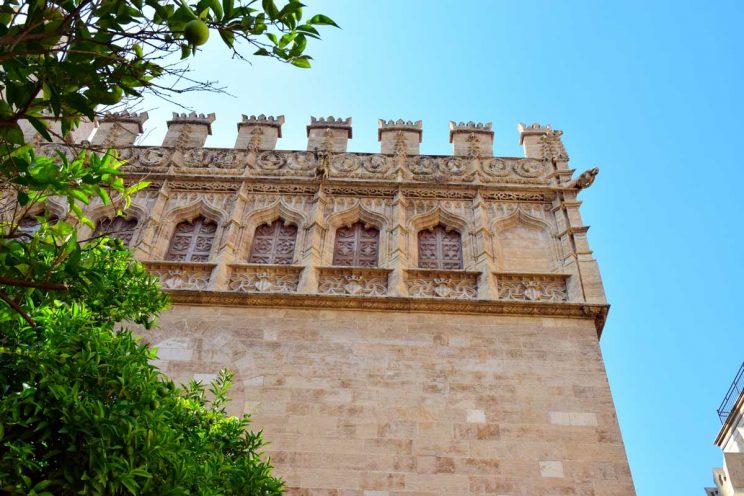 Looks like a fortress from the outside with its bleached walls and tower.

The Silk Exchange was the only designated building for merchants to conduct their trade. It was strictly for trade and no politics were allowed within its walls, not even political problems with Aragon and Catalonia disturbed the trading.

Valencia’s La Lonja was the place for traders from Italy, North Africa, and France to name a few. The currency was strong, and the city flourished. There are 3 main sections to the La Lontja de la Seda, and they all lead out to the Courtyard of the Oranges to make a square. This was a recurring theme in those days, once again, our Alcazar in our former home of Seville came to mind. 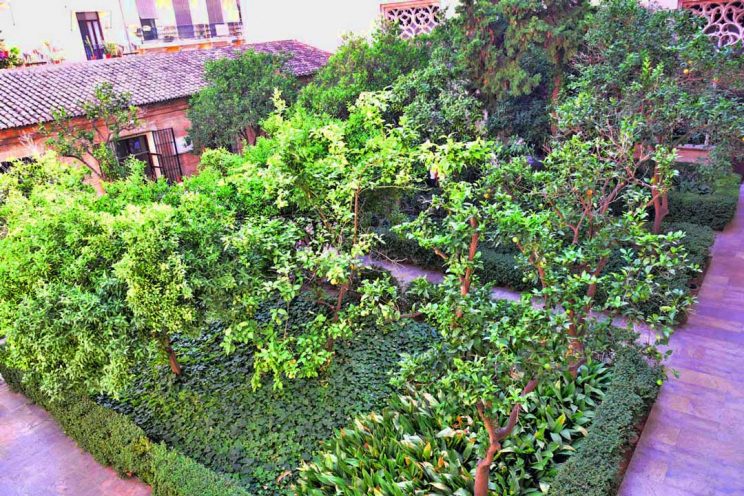 Courtyard of Oranges. They were not in full bloom.

Looking for where to stay in Valencia? Click here for the best-priced hotels.

CONTRACT HALL OF THE SILK EXCHANGE: 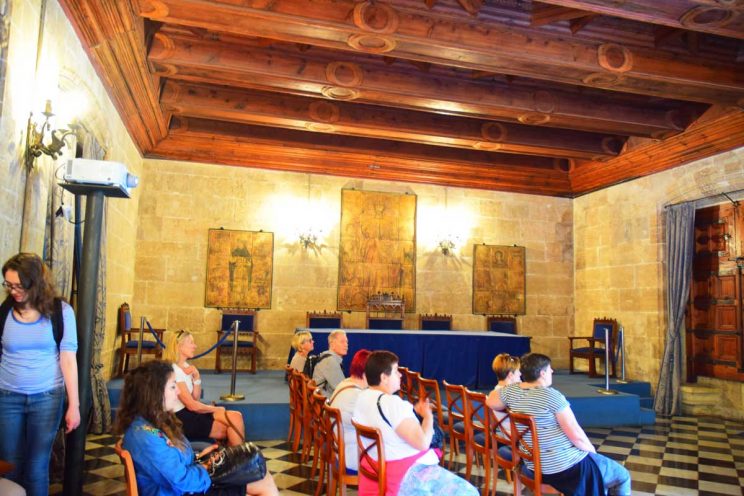 I spy some familiar faces in the image. On the bottom floor, you can have a seat, watch and listen to the history of the Silk Exchange before going up the stairs. 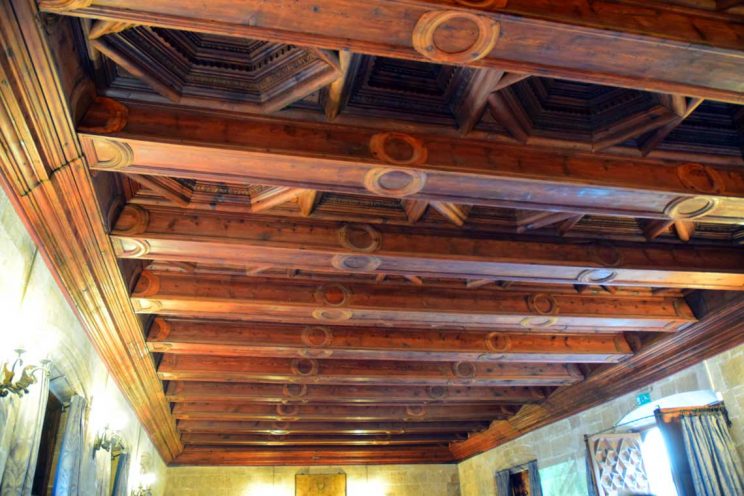 Close up of the ceiling..
This is the main part of the grounds, and takes up the most amount of space. This is where the actual wheeling and dealing took place. There is a small chapel in the basement of the building called Chapel of the Immaculate Conception. Completely empty, so a quick look. 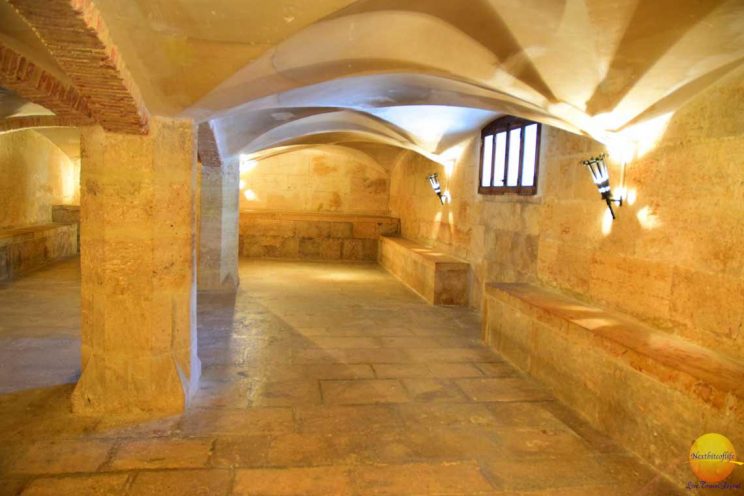 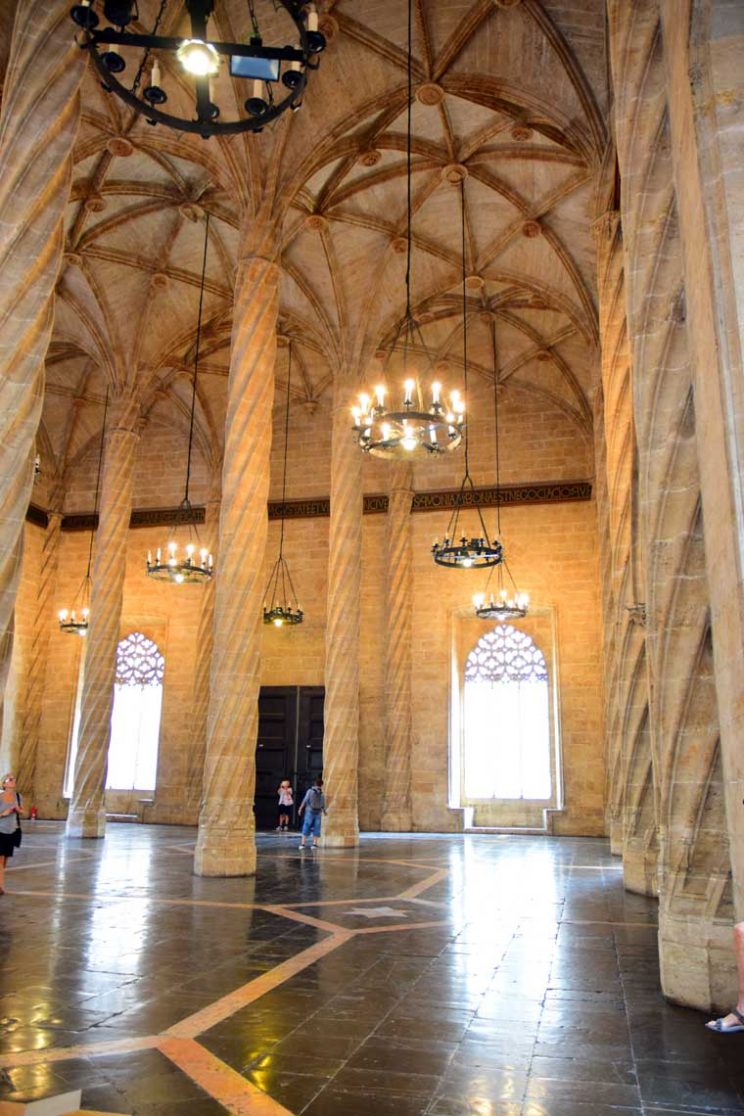 Very impressive room, just like the others. Your neck definitely gets a workout 🙂

The room has quite a number of columns with very detailed artwork, ropes of ships, skeins of silk and they go all the way to the ceiling which is just over 17 meters ( 55.7ft) in height. They sort of look like palm trees to me. The floor is entirely made of marbles of different colors, including black and white.

We found out later the saying that was way high up that we couldn’t read. It was a reminder for the Christian traders to behave themselves. I wonder if this means there were no Muslim traders allowed, or that they had a different saying 🙂 . This is the rough translation:

“…Fellow countrymen, see how kind trade can be,
when there is no fraudulence in words, when
promises are made to ones fellow men and not broken,
when money is not given with usury…”

Merchants who were bankrupt or unable to pay their bills were kept in cells on the upper floor. I bet it was a pretty shameful experience. 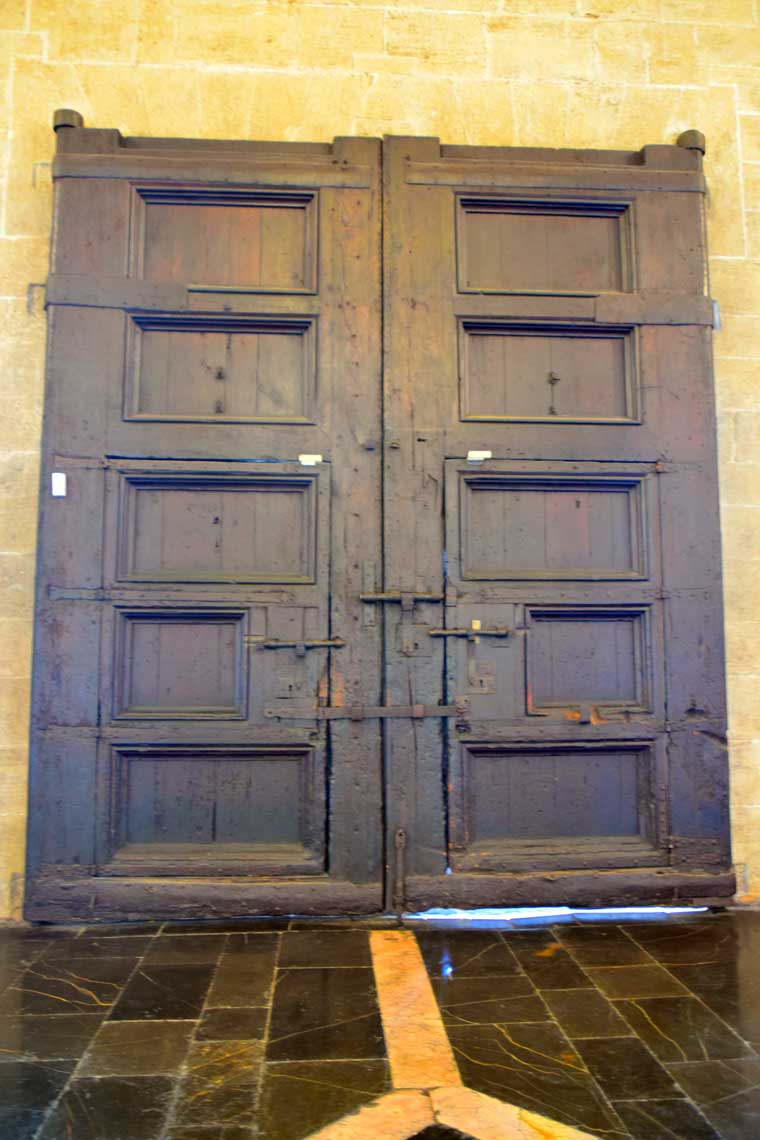 The doors were definitely something to behold.

I think this was my favorite hall. So much detail..and the doors! 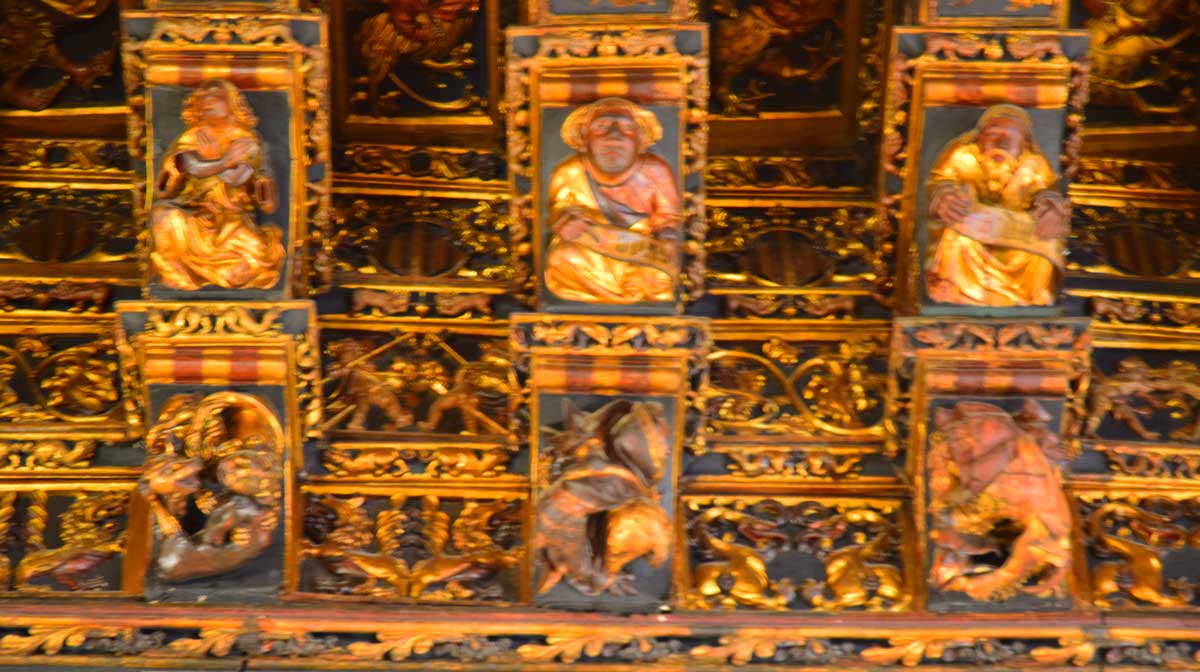 Close up of some the detailed art with busts. Sorry, it’s not very clear, but it was high up 🙂

This is the third section of the Llotja de la Seda (Valencian)  which is accessed from the Courtyard of Oranges. I think my most favorite part was the massive door leading to the hall itself. It had acquired a beautiful patina from years of exposure to the elements. The hall itself is decorated with medallions with busts of Roman emperors and other dignitaries.

I absolutely loved this door! 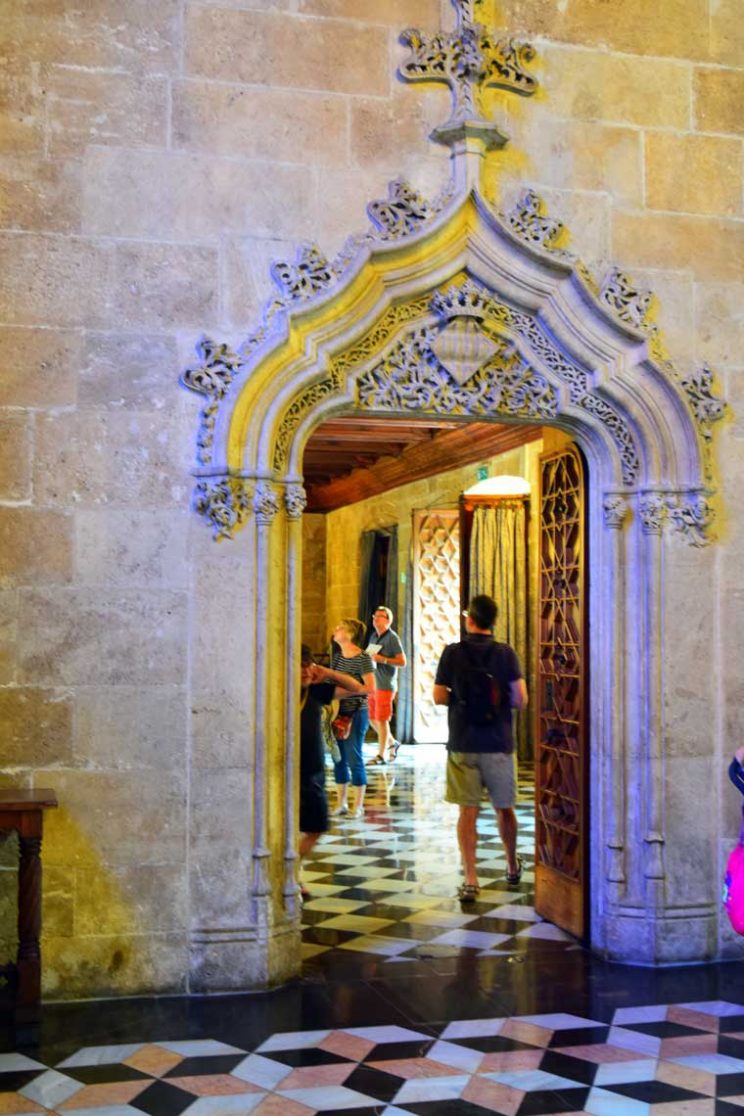 The ornate workmanship is fantastic. I wonder what hidden bust hides here! 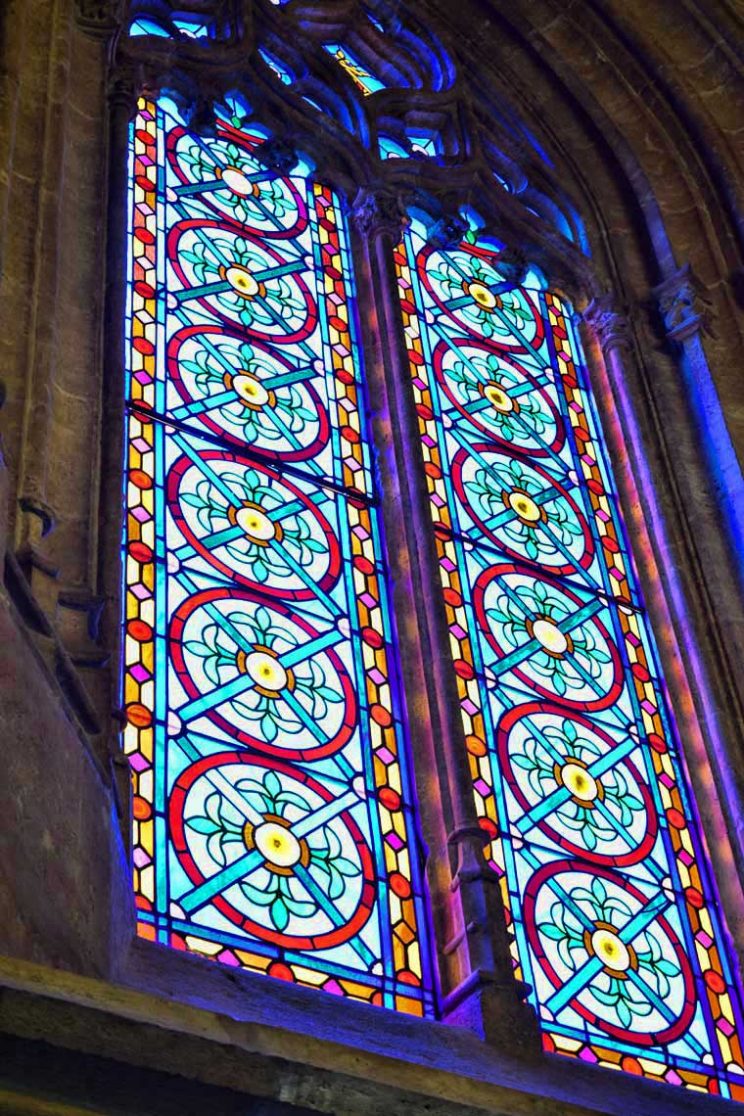 One of my favorites. I believe this one has secrets and sees everything.

Monday through Saturday: 9.30AM till 7PM

Entry fee is €2 so a bargain

Free entry of Sundays and Holidays

Yes. It is an amazing world heritage site that l think should be part of any itinerary of things to do in Valencia. The Courtyard of Oranges offers shade from the heat and smells very nice too. Make sure to get a map in English so you can get your bearings in one of Valencia Spain’s points of interest. Definitely one of the top 10 things to do in Valencia.